Anyone who has kept an eye on Jeremy Corbyn’s first few weeks in office can’t fail to have noticed that he has attracted some criticism and censure.  It seems for some that he can do no right with his allegedly questionable friendships, his alleged romantic history, his alleged economic recklessness and, of course, his alleged lack of support for the feminist cause demonstrated by his top shadow appointments.

Indeed in the early morning of his first full day in office he was pursued relentlessly by a Sky News camera crew taking him to task on just that last point.  Many commentators were quick to upbraid his supposed rudeness and aloofness in stonewalling the camera crew.  The message appeared to be that this is 2015 and the Leader of Her Majesty’s Opposition should be ready, willing and able at any moment to contend with a TV presenter’s questions.

It is reported that Mr Corbyn has historically been a cyclist and has never driven and that he intended to eschew an official car.  Such doorstepping may have caused him to question his resolve on that point.  Ensconced in a Merc no politician can be criticised for failing to answer questions, they probably can’t even hear them and, anyway, a car is a private place.

It remains to be seen whether Mr Corbyn’s stated desire to do politics differently will endure and succeed but I strongly feel that his silence was not rudeness but simply an assertion that while walking in the street he was under no obligation or duty to anyone to answer questions.

A 24 hour ‘always on’ rolling news media ensures that there is an insatiable appetite for stories and if they are slow to emerge then the media will inflate and in extremis create those stories.  It is not fair or right to expect politicians to speak to the media at any moment of the day or night except perhaps about matters relating to national security.  It is not fair on them and it is not fair on us.

I want politicians to have the time to think; I want their responses to be considered and informed.  I want them to have a private life that is separate to their public life.  Many of us work on our commutes and indeed there was a recent European Court of Justice ruling that in certain circumstances commuting IS work.  However there is a huge difference between choosing to work (discreetly) on a brief on the train and having to do so.  Even the most industrious barrister would not attempt to work whilst walking to court.

In that regard I actually have a great deal of sympathy for Mr Corbyn and just as the 24/7 culture damages politicians and their effectiveness so it does us.  We need to work to live not live to work even though all the trends of modernity militate against us achieving that.  A wonderful movement developed in Piedmont in Northern Italy in the mid-80s, Slow Food International, agitates languorously against the joylessness and lack of fulfillment fast food brings.

We are so much more than our jobs, a truth that men and barristers in particular often struggle to grasp, but when we do not develop ourselves away from work we and those around us suffer as, eventually, does our work.  Mr Corbyn, like all politicians, needs and deserves time to be a person not just a politician.

We could all do with living slower lives making more space and time for experiences outside the workplace.  This about sums it up: 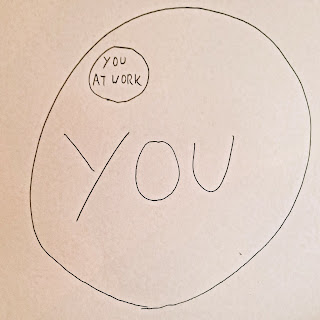 Posted by Maximilian Hardy at 08:56