Operation Crumbling Edifice - Why legal aid cuts imperil us all

London is in the midst of a huge emergency services training exercise defiantly codenamed Strong Tower complete with firemen wearing those terrifyingly outlandish Nuclear, Biological and Chemical suits.  With a modern twist the training even has its own hashtag #999exercise.  Apparently the training has been in the offing for months, http://www.bbc.co.uk/news/uk-33315691, and its occurrence in the immediate aftermath of the terrible massacre in Tunisia is completely coincidental.


There are obviously three purposes to such training exercises.  First it is essential that the emergency services and soldiers are ready for a city based attack and it is necessary that they be trained in a city for such a purpose.  Secondly such a public show of preparedness is intended to act as reassurance to us that the authorities are ready and properly equipped and lastly it is a deterrent to any ‘lone wolves’ and groups inclined to launch an attack.


The fact this training does not occur in the middle of the night when negligible disruption would be caused is the clearest possible indication that the latter two purposes are firmly in the government and planners’ minds.  To some extent this is a massive public relations exercise.


As a member of the public it is very hard to know whether one should be reassured or alarmed by such a show of strength.  We are by now all familiar with the terrorism threat levels on display at the entrance of most public buildings:

By way of reminder the current threat level is Severe.  Since 2006, when the threat level was made public for the first time, the level has never been anything lower than Substantial.  Pause for a moment and reflect whether your anxiety or fear relating to the imminence of a terrorist attack has fluctuated in any way with the changes to the threat level since then.  What is the purpose of this grading and what is the purpose of making it public?  Ostensibly it is to encourage public vigilance but without the revelation of any of the intelligence or material upon which the security services base their assessment of the threat level.  In other words we are being told that a terrorist attack is potentially imminent but without being told why.


Engendering unfocussed and diffuse anxiety on the part of the populace is at best pointless and irresponsible.  At worst it produces a rationale for the government to trample yet more intrusively on our private lives.  We must be careful to subject any government led incursion into our civil liberties to the most careful scrutiny and testing.


That being said, as the great political philosopher Ronald Reagan observed, a government's first duty is to protect the people, not run their lives.  There can be no doubt that discharging this duty is an extremely onerous undertaking  that has become vastly more complicated since the turn of the millennium.  Equally it would be extreme folly to assert that the government should be obliged to make public all information and intelligence that falls into its hands.  Up to a point we have to trust that the government is fulfilling its first duty to us without demanding a right to call for evidence that it is doing so.


Where however evidence is not only called for but is central to the proper scrutiny of the conduct of the state in its protection of us is in criminal proceedings.  The people charged with ensuring that evidence comes to light and is properly considered are lawyers.  In the first instance it is the role of prosecutors to receive evidence from the police and other investigators in order to make charging decisions.  It is the equally important role of defence lawyers to call for evidence that rebuts the basis for charging decisions and to test such evidence as the prosecution relies upon in criminal proceedings.


If there are no lawyers or, just as dangerous a situation, such lawyers as there are can’t properly perform these essential tasks then evidence goes ungathered, unpresented and untested with miscarriages of justice the result.  We are in the midst of nothing less than a full blown legal aid crisis and the imminent action of many legal aid lawyers is about to precipitate a massive stress testing of the criminal justice system.  This exercise is no less important that Operation Strong Tower except in this case it would more aptly be named Operation Crumbling Edifice.


The next few weeks will be worth watching extremely closely because what legal aid lawyers are saying by their actions is that the criminal justice system is on the point of collapse.  Suppose for a moment that today’s training exercise was a real attack with suspects apprehended.  How is the government protecting us in circumstances where the criminal justice system is malfunctioning so badly that no safe convictions could be obtained?


The worst kind of police officer is that which believes that arrest of a suspect is the end of their responsibility in a case.  In reality everybody involved in the criminal justice process bears a responsibility for ensuring justice is done and the resolution of that process is a jury’s verdict not arrest in a street.  What legal aid lawyers up and down the country are saying is that they can no longer fulfil their roles in advancing the criminal justice process and the reason is that the government is failing us all in its first responsibility to us and that is our protection.
Posted by Maximilian Hardy at 07:32 No comments:

Sing the Unsung Song & Search for the Hero Inside 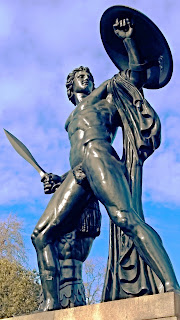 We all know what a hero looks like and if we’re in any doubt Bonnie Tyler is on hand to remind us that he’s gotta be strong, he’s gotta be fast and he’s gotta be fresh from the fight.  But without intending any disrespect to Bonnie it is probably about time that the concept of heroism be revisited.  This is because heroism as a martial concept should be over and heroism as an exclusively masculine quality is also now redundant.


Interestingly the song also name checks both Hercules and Superman who, it hardly needs pointing out, are not real people. Neither of course is Achilles (pictured above as a monument to the Duke of Wellington's defeat of Napoleon at Waterloo 200 years ago).  Achilles as a template for heroism does have one major virtue and that is his fallibility.  If heroism is to have any currency as a modern concept it must admit of fallibility.


Lauren Laverne recently wrote persuasively in The Pool that heroes need not be men, or even people, citing as some of her own heroes Miss Piggy and Mr Toad.  I certainly don’t cavil with her central premise that we should not feel constrained in selecting who our heroes are and the virtues they embody simply by reference to their gender or existence.  I do however feel that a compelling argument can be made that there is a genuine benefit in identifying real life living heroes.

If you’re ever lost for small talk or are phobic to it an often intriguing insight into any person’s personality can be gleaned by asking them who their heroes are.  We are used, preposterously, to games players being cited as role models but are these really the heroes we need or deserve?  The public eye and the public’s voice as expressed by the media fails miserably with the concept of modern heroism.  Celebrity is the currency of our age but as a model to young people or a template for how life should be lived its emptiness is profound.  The media, when it does articulate heroism, does so almost solely by reference to military conflict and this, I believe, is problematic.

There is no question that jumping onto a grenade to save your comrades’ lives is a heroic act according to any definition of heroism.  But when one reflects that the Afghanistan conflict cost 453 UK military lives is there not a benefit in considering what the cost of martial heroism is?  If heroism remains confined to situations in which its definition entails exposure to serious risk to life or limb then what chance does heroism have of informing every day lives?

Edith Cavell shot at Dawn by the German army for treason on 12th October 1915 for helping injured soldiers escape Belgium, renowned for her assertion that ‘Patriotism is not enough’, and Maximilian Kolbe a Catholic priest killed at Auschwitz on 14th August 1941 when he volunteered himself for death in place of another camp inmate are good examples of civilians who manifested heroism by way of the ultimate self-sacrifice.  Again however these actions occurred in the midst of wartime and their actions are of a nature that though we believe we might be capable of we in reality, thankfully, are extremely unlikely ever to find out.

What we need is a definition of heroism for 21st century peacetime: a cadre of people to whom we can look up to not just because they were sacrificed for politically motivated conflicts with nebulous outcomes.  A helpful exercise if you don’t have a personal Valhalla at your fingertips is to take a moment to reflect on people you know in the public eye who you regard as heroic.  They are of course, like Achilles, permitted their flaws: these are, after all, real people and the notion that heroism should be synonymous with perfection should be banished.  Just consider for a moment what we now know about Churchill and his private life and whether he would have withstood one day’s scrutiny by the modern media.

Consider also what heroism means to you.  For me its selfless action motivated by love for others without expectation of reward.  In short if what you’re doing is well remunerated it is unlikely to be heroic.  By this token any one of the Ebola nurses and doctors should be a paradigm example of a modern hero and yet how many of them can you name? What medals have been struck for them or parades through central London arranged?

Once you have populated your own personal Olympus a good starting point would be to tell that person why they are a hero to you.  Then do what you can to publicise their achievements.  It is long past time that a popular narrative of heroism achieved greater prominence.

I would suggest as somebody who deserves much greater prominence for his endeavours than he typically receives is Clive Stafford Smith who fought tirelessly for condemned mean on death row in the United States and latterly has been fighting for the rights of those still shockingly detained in Guantanamo Bay.  If you share my admiration for this man and his work you may want to donate your money or your time to his laudable charity Reprieve.


Film’s desperate flogging of the superhero dead horse encapsulates the young and not so young’s yearning for escapism from a difficult and complicated world but the truth is there are heroes all around us and once they are given their rightful prominence you can set about the most important task of all and search for the hero inside yourself.
Posted by Maximilian Hardy at 10:22 No comments: