Wellsprings of Wellbeing - Watery wellness when all around is maelstrom 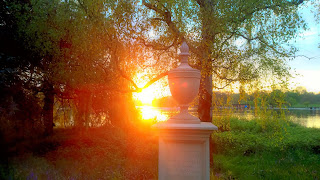 One thing of which I was proud as chairman of the Young Barristers' Committee in 2014 was providing a platform at the Young Bar Conference to a session on Wellbeing at the Bar.  A survey was conducted in October quizzing barristers about the their working lives and levels of stress.  Over 2,500 members of the profession responded providing the Bar Council with a broad and clear and detailed view of what is going on in barristers' lives.  There will be a session at this year's Bar Conference and a seminar on managing stress is being conducted by the YBC later this summer.

At the Bar Council meeting held this morning Robin Allen Q.C. provided a snapshot of the results of that survey and sadly but not surprisingly some of the responses illuminated the real despair some of our colleagues feel.  I am extremely pleased that the Bar Council is taking seriously the peril of stress and anxiety within the profession.  Other major institutions and companies have long been alive to the virtue of Mindfulness within the workplace and the importance of making available really effective and accessible pastoral care to employees and its about time the Bar Council followed suit.

Robin spoke of a concept the name of which I had not heard before but which which will be immediately recognisable and that is Cognitive Renewal.  Every barrister knows that this is no nine to five job and that anxieties about cases can easily pervade every waking, and when things are really bad, sleeping moment.  Furthermore no clerk in history ever suggested to a barrister that perhaps the time was ripe for them to take a holiday and yet it is only through a proper detachment from court, chambers and the papers that a beleaguered whirring brain can be properly nourished, calmed and restored.

That being said in our day to day lives there are so many things that we can do that provide even an essential moment's release from Bar fatigue.  You may have all manner of activities and mechanisms in your own life which fulfil this purpose and, for the avoidance of doubt, I am obviously not talking about alcohol.

For me that escape is swimming.  Not ploughing relentlessly up and down in some chlorinated roped off pool and certainly not neoprene wrapped triathleting but just being in water outdoors under the sun, the sky, the rain and the clouds; in and of nature.  I prefer to do this in the Serpentine (above at sunset) where membership of the Serpentine Swimming Club is £20 per year or the princely sum of 5 pence per day.  It is open to all, the facilities are almost non-existent, there is a unisex windowless changing room about the size of a beach hut, the showers are cold, the water is (obviously) unheated and untreated and yet it is paradise to all who swim in it.  And they know it too. 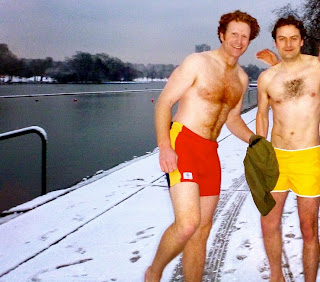 However for those of us for whom aquatic angst annihilation provides an essential release London is on the brink of leading a world beating swimming revolution.  Within days the King's Cross Pond Club will be fully open to the public and I was fortunate enough to sample its delights at its grand opening on Friday evening.  Harassed commuters swarming on and off their sardine cans at St. Pancras and King's Cross now have on their doorstep an idyllic hillock based oasis cleaned naturally by reedbeds.  It has been evocatively described by Jenny Landreth in her Guardian review, a review because not only is it a swimming pond it is also a work of art!

Most excitingly of all though is the prospect of being able to saunter out of the Embankment gates of the Temple in swimming trunks and have within yards the Thames' first swimming pool.  An inspired trio of young men are looking to construct, just meters upstream of Thomas Heatherwick's Garden Bridge, a floating lido of filtered, heated Thames water.  On 22nd May a Kickstarter campaign to raise £125,000 towards the Thames Baths closes and you can help them over the finish line here.

Whatever your escape is make time for it, never give it up and lifelong wellbeing will be your reward. And very cold feet.


It is difficult indeed to elicit much outrage or public sympathy at the news that one of Mr Grayling’s last acts in office was to introduce a ‘menu’ of court charges for convicted defendants.  On the face of it most would think it perfectly reasonable that those convicted of criminal offences should pay a contribution towards the costs of administering the criminal justice system.  However this is a classic example of where political PR and grim reality come into direct conflict.

Most criminals are poor people.  Poor people don’t have much money and criminal poor people are disinclined to hand over such money as they have.  Compelling criminal poor people to hand over money costs money and if the ultimate sanction of imprisonment is deployed it costs an enormous amount of money, almost always vastly more than the sum that is owing.  The effect of all of this is that any sensible person hesitates before imposing financial obligations upon defendants, even more so when they are imprisoned the result of which, of course, is that they are unable to earn any money to discharge their financial obligations.
In 2007 the then Government introduced the Victim Surcharge a statutory levy applied at sentence in all cases on a sliding scale:

Many judges in my experience affect ignorance of which sum applies because the whole thing smacks of issuing a parking ticket and in a serious case can seem a farcical and demeaning exercise.  However the absurdity of the Victim Surcharge, never more prominent than when applied in relation to ‘victimless’ offences, pales into insignificance when set against the Criminal Courts Charge: ( https://www.gov.uk/government/uploads/system/uploads/attachment_data/file/336085/fact-sheet-criminal-courts-charge.pdf )
This obligatory charge must be imposed by all courts when a case ends adversely to a defendant, from the magistrates’ court to the Court of Appeal.  Interestingly it does not seem to apply to unsuccessful appeals to the Supreme Court, possibly a tacit acknowledgement by those responsible of the utter indignity of the highest court in the land charging the defendant a Ton or a Monkey for having the temerity to bother them.
I have seen some embarrassing and shaming scenes in court but few more excruciating than a Lay Bench at Harlow magistrates’ court ordering a trio of likely lads in the dock to jump and down to hear if they had any coins on them to bump up the sum they would pay on the spot towards the fine imposed on them.  Of course this kind of thing is popular with some but populism does not mean something is right.

Increasingly judge’s sentencing remarks are released in full following sentence in the most serious of cases.  Devastating homicide cases resulting in whole life sentences for the defendant and ruined lives for the bereaved will now conclude with the judge ordering the defendant to pay £1,200 towards the expense of trying him.

In a tiny concession to realism there is of course a get out for impecunious criminals as the Criminal Courts Charge states:
‘If after 2 years you have: made best efforts to keep up with the payment terms of any other financial impositions and the criminal courts charge and; you have not been convicted of any other criminal offences during that period you may apply to the magistrates’ court for consideration to write off the criminal courts charge.’

Accordingly it will not be long before a whole life tariff murderer gets a day out of prison to waste the time of the magistrates and public money for the hearing in order to state the obvious, which is that being banged up was something of an obstacle to finding the readies to discharge the Order.  It is little exaggeration to imagine a future where there will be meters on police cars and cell tariffs at Booking In.
Sentencing is a solemn affair and rightly so.  It is perhaps the point at which the dignity of justice must most vigorously be preserved.  Turning judges into traffic wardens demeans victims, the defendant, judges and justice itself.  These charges are wrong in principle and will be costly in practice.
Posted by Maximilian Hardy at 10:19 No comments: