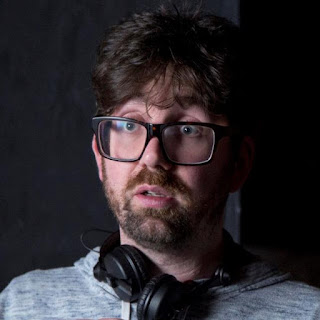 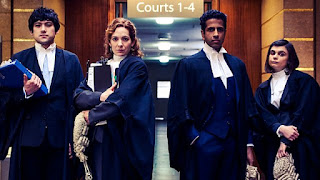 Kieron Quirke was a theatre critic for the Evening Standard before he made it as a TV writer. His first show on TV was the cult mystery soap Trinity, created with Robin French. He and Robin then had a big hit with Cuckoo, which broke records for BBC3, and ran for five series, starring Greg Davies and various famous Americans. Defending the Guilty is his first show as solo writer. It stars Will Sharpe and Katherine Parkinson, and is (some might say) the best TV about barrister life for decades.

I was asked. Big Talk productions were very rightly tickled by Alex's book (Penguin, £7.99 on Amazon Prime), and thought there was a sitcom in it. But the book doesn’t have a story and characters as such, so they needed a writer to make that jump. I was available. I thought at the time Cuckoo might not do any more series - although it did. And, I think crucially, I had some legal background.

My dad and my uncle are both barristers in Birmingham - and at one point I got reasonably close to becoming one myself.

When did that happen?

In the early years of the writing career, Robin and I had a terrible August where every single project we’d developed over three years of scraping by died in the dirt. I was breaking up with my girlfriend and staying out at nights, which got me sacked from my money job - so I took out a loan, rocked up at City University a week after term’s start and did the CPE.

So I think Will (the lead character in the show, played by Will Sharpe) has this ever so slightly unfocused approach to the law that comes from how I felt on that course. There were people there SO fired up to be barristers - clever kids with big mouths and big plans - and for me it was just an escape route. Which I didn’t take in the end. I think I paid off the loan last March.

Were you any good at it?

I was definitely the funniest guy in my EU law class. Some cracking stuff on direct effect.

You've spent a lot of time in court, what's most surprised you about the court process?

I was surprised when I first started attending court - it felt ramshackle. I don’t think I saw a single trial that started on time. Barristers repeatedly explaining that they only got the brief that morning, or that disclosure hasn’t been completed, or that the defendant wasn’t there. Judges looking by turns resigned and quietly apoplectic. I was genuinely concerned when I started because I wanted to give a ‘realistic’ view of the job - and too, too much of it seemed to be procedural delay. But then that began to get very funny.

And I think the other thing I was surprised by was the bit that TV does like - how often trials would come down to a cross-examination, cases falling apart when a barrister finally got to put the facts to the defendant or complainant. I think in those moments, I picked up some taste of the appeal of the job - which on a cold morning in Dagenham can seem unclear.

What have you made of the fabric of the court estate?

From my perspective there’s something gloriously bleak about the barrister’s daily life - the trains, the canteens they have to eat in (if they can find any that are still open), the cold corridors they have to wait in. It’s such a surprise to people, conditioned by TV drama. I think the show captures a lot of that bleakness, but in truth, we wanted people to enjoy watching, and so the court surroundings are never of the worst kind. Some of the courtrooms I sat in with trestle tables for evidence, and plastic chairs would just be nasty on camera.

As for the wider fabric of the legal system, well I’m a comedy writer first and a hugely incisive social commentator second. The underfunding, the never-ending threats of strike action, and a certain atmosphere of desperation are all in there. But the show is mostly through the eyes of pupils - so their focus is more on their own survival than that of the system.

What do barristers think is fascinating/hilarious about their job but actually makes terrible TV?
Ha! I thought most of the barristers I spoke to had a fair idea what played and what didn’t.

I got a lot of stories about judges, sparring with judges, beef with judges etc. and that’s a trope that feels familiar and I’m never going to match Rumpole on, so I stayed clear of that. Also, quite a lot of who’s banging who. I have got a bit of that in there. But I noticed legal twitter is NOT average barrister chat. People seem so noble online.

What is fascinating/hilarious about barristers that they don't even notice?

First off, the truth is that a lot of barristers ARE funny. Intentionally. They’re good with words and their job is skewering people, and that’s a gift for me. And there’s unintentional ways they’re funny too. I somehow feel every time a barrister agrees with me, she starts her sentence with ’No...'

I think barristers have to pretend a lot - keep up some kind of confident front - and pretending can turn people into funny versions of themselves. Plus it’s a job people come to with dreams - one of the special jobs - but it’s hard and the money’s getting worse and it can grind you down. So a lot of the characters in the show are trying to keep up a front - but they’re all a bit disappointed too. I hope that makes them lovable. It’s written with a ton of affection.

Have you met any clerks/what do you make of the job?

I’ve met some clerks. And I have an agent - so I know the weirdness of employing your boss.

'The Good Wife' is a tour de force. The 'ER' of the legal procedural. Hard to believe the standard they maintained. And David Kelley obviously.

I really enjoy the Peter Moffats. But I’m a 'Rumpole' completist. The short stories which John Mortimer cannily made out of his scripts were the first funny books I read as a kid, and he’s very close to my heart, even if the TV show's a little slow by today’s standards.

I used expressio unius excludio alterius in a script meeting once... which got laughs and won me admirers.

I like them. From a TV perspective, they’re gold.

I suppose barristers will be reading this - so a plea for understanding. There’s going to be some infelicities and inaccuracies in the show. I think I know most of them - and they were committed in the name of clarity and fun. If you spot something that feels really wrong, please tweet me your outrage and keep watching.
And I know you’re meant to call them pupil supervisors these days. But in the end - it’s just a better word.
Posted by Maximilian Hardy at 03:56 No comments: