The Butcher, the Baker and the Barrister: The way things were they will not be. 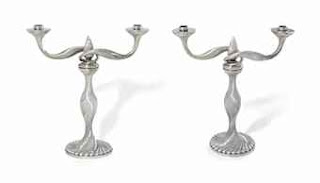 Tied up in knots and choked by choice - Why less is more.

I have just moved house.  Notorious for inclusion among the three Ds of devastating stress: Divorce, Death and Decamping.  It must be a near universal experience of a house move to be horrified at the sheer quantity of stuff that has been accumulated over the years.  Perhaps there are ascetics who have forsworn belongings who manage to make moves by bus rather than groaning pantechnicon and squadron of burly men.  If there are I’m not sure they and I would have much in common.

A paradox in my own approach to life is that I pride myself on an ability to turn up at a departure gate with all necessary belongings in a plastic bag.  Yet in my permanent life I am dwarfed by mountains of pointless detritus.  I have twelve ‘fancy’ waistcoats for wearing at weddings.  This is not normal, it is not healthy and it is not OK.  I need a motto or slogan for my life, a Max’s maxim - Nobody’s looking at you mate.

This is not exaggeration, as this inadvertent experiment I undertook demonstrates.  The name Karl Stefanovic is unlikely to mean much to most Brits but he is an Australian news anchor who wore the same suit on screen  for a year to expose the contrast in scrutiny of men’s and women’s appearance.

In my own tiny recreation of this endeavour I have worn this tie to work every day for the last three months: 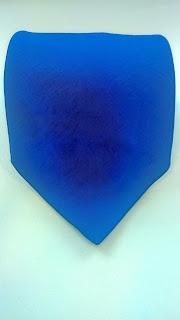 It is a plain blue handmade tie from Paris.  I did not buy it I inherited it.  It is from a manufacturer so discreet there is no mention of it on the internet.  It is a very nice tie and was no doubt very expensive.  My reasoning was if you’re going to wear one thing it best be a very nice thing.

For three months I have got up and have not had to give a second’s thought to my choice of neckwear for that day.  It has been one less worry at a very worrying time.  You of course may feel that a normal person  would hardly have to worry about what tie they were going to put on.  But, as I have already said, I am not normal.

Now that I have been reunited with what my wife determinedly believes is the effluvia of my past rather than a jointly owned cornucopia of delights I can once again choose what message I wish to convey to the world via a scrap of cloth about my neck.

It is not an easy choice because this is my tie collection: 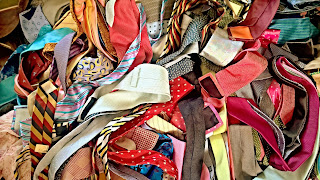 As all barristers know there some situations that are so grave that there is no mitigation so the only defence I will raise is that I inherited the vast majority of these, of this insane profusion of peacockery.

Never have I understood better that if I want to tell the world something I can do it with my mouth, or even better my actions, rather than through some obscure semaphore of silk.  Not one single person remarked on the monotony of my tie, nobody decried my lack of imagination,  in short nobody cared.
When Gandhi died, a barrister who knew a thing or two about travelling light through life, these were all the possessions he owned in the world: 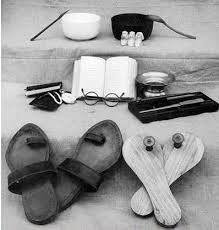 The moral of the story is: little but lovely.

Posted by Maximilian Hardy at 06:45 No comments:

How to be a witness: Good Looks & Fleeting Glances

We do not teach children to be witnesses.  It is not surprising therefore that the quality of witnesses varies enormously.  As patients are to doctors so witnesses are to barristers and barristers will habitually refer to good or bad witnesses.  A good witness is, first and foremost, truthful.  A good witness is clear.  A good witness is reasonable.  A good witness is accurate.
The purpose of this blog is to help you be a good witness.  This is not by way of coaching which is, quite rightly, completely forbidden.  Instead this is intended to be a general survey of matters you may want to (try to) bear in mind if you are ever unfortunate enough to be a victim of or witness to a crime.
I was prompted to write this by a recent random attack on a person close to me who was alone at night in the street.  This occurred without warning, was unprovoked and without any apparent motive.  Mercifully no injury was inflicted and the assault was short lived but great distress and anxiety were unsurprisingly caused.  As I reflected on this it occurred to me that in all the time I had known this person we had never had a discussion about what makes a good witness.
As a teenager I underwent First Aid training although have fortunately never had to deploy the skills I learnt and hope I never have to but it is a source of comfort to me that I have this essential background knowledge.  I hope that what I set out here can remain in your background knowledge, ideally never needing to see the light of day.
If you have been unlucky enough to be the victim of violent crime you will be sadly familiar with the fight or flight response triggered by the massive adrenaline rush that accompanies such incidents.  This response is very useful for the immediate preservation of life however it is unfortunately also what causes many people to be terrible witnesses.  Panic and clear thinking don’t go hand in hand and while it is easy for me typing this in comfort to say don’t be a rabbit in the headlights, if you stare into them you will be blinded and will make a poor witness.
A remarkable experience many criminal barristers will be familiar with is reading witness statements containing descriptions of robbers or assailants, sometimes quite full descriptions, which when compared with CCTV footage of the incident are completely at odds with the appearance and clothing actually worn.  It is an experience that better than any demonstrates the appalling danger of injustice posed by the honest but mistaken witness.  Such witnesses can project the powerful persuasion of a conspicuous truth teller while inflicting worse damage to the fairness of a trial than the most skilful dissembler.  You do not want to be one of these witnesses.
The case of Turnbull paved the way for recognition of the dangers that identification evidence presents and there is now a significant body of statute and case law that sets out the safeguards that must be in place before such evidence is allowed before the court, a precis can be found here.
But this is no law lecture instead here is some simple advice to ensure that you will never be an honest but mistaken witness:
I readily acknowledge that much of the foregoing is obvious common sense and it would be preposterous to imagine that this blog will be at the forefront of your mind should you ever become a witness.  But if just one thought can lodge in your subconscious it should be this: Good Looks not Fleeting Glances.
By way of a brief postscript and aside a vexed issue that is occasionally aired in discussions of gendered conduct is how men should walk down darkened streets.  The sad reality is that for many women the sound of footsteps fast or slow behind them sets alarm bells ringing.  What is not so often admitted is that the same is true for many men. Whether the fear is of robber or rapist fear is fear and it behoves all of us, men and women, not to engender unnecessary anxiety when we are out and about.  Love thy neighbour and all that.
Posted by Maximilian Hardy at 08:48 No comments: